Lack of implantation of an embryo: when the numbers count

Investigating the role of immunology and microbiology in the success of fetal implantation.

It is recognised that embryo implantation leading to live births in assisted reproductive process (as high as 25% failure rate) remains the biggest challenge in any fertility clinic visits for couples who seek help in having children. The same applies to couples who manage to conceive naturally but who are faced with recurrent fetal losses (the spontaneous recurrent aborters).

Despite the progress made with new research into embryo quality, techniques such as intra-cytoplasmic sperm injection (ICSI), etc, the interaction between maternal physiological responses and the foetus remains a well-kept secret. Local immune tolerance, angiogenesis, cytokine and hormonal balance, cellular and molecular mimicry, genetic and epigenetic as well as environmental cues are all factors that have been shown to influence pregnancy outcomes (Dosiou and Giudice 2005; Thaxton and Sharma 2010; Zhang et al., 2011; Hemberger 2012; Van Dijk and Oudejans 2013; Hughes 2014; Rai and Cross 2014).

The immunology:
The immunological tolerance paradox associated with the survival of the allogeneic embryo has been recognised for over 60 years and it is now generally accepted that this is due to the main immune cell types in the endometrium, namely the uterine NK cells (uNKs) and the suppressive T-regulatory cells (Tregs).

During the pre-ovulatory phase, only a few, small and agranular NK cells are present in the endometrium (Peel 1989; Kalkunte et al., 2008; Le Bouteiller and Piccinni 2008). There is a dramatic increase in the number of these cells during the secretory phase of the menstrual cycle as progesterone levels increase. These numbers rise further if the pregnancy ensues. Since progesterone levels drop at the end of the menstrual cycle and NK cells also undergo death, it has been proposed that their survival depends on progesterone.

They constitute almost 70% of all mononuclear cells in the pregnant womb. Their number decreases from mid-gestation and these cells are almost absent at term. While their name implies an aggressive cytotoxic immune warrior killing virally-infected host cells, in the endometrium, these cells lose their killing phenotype and offer a supportive role to the developing embryo (Sharma, 2014). Their cytokine profile is very different from those that circulate in peripheral blood. Early during the implantation process, it seems that there is a shift from an adaptive (TH1) to an innate immune profile and the largest majority of the cells in the endometrium comprising these innate cells (up to 65-70%) are these uNKs.

In 1990, the concept of immune suppressive cells was born and it is now well-documented that such cells are the CD4+ subtypes defined as T-regs (phenotypes of CD3+CD4+CD25+). These cells play a crucial role in the maintenance of self-tolerance and immune control and more recently were shown to play a critical role in the maternal-fetal tolerance in mouse models as well as humans. Together with the uNKs, the Tregs create an environment of self-tolerance to accept the allotypically different embryo to the host tissue thereby leading to the promotion of implantation. The surge in the progesterone further promotes this process by inducing cellular replication in the tolerance cells, keeping the aggressive CD3+ T cells and the NKT cells (CD3+CD16+CD56+) at bay.

How then do we determine these important cells and whether they are present in sufficient numbers? Menstrual blood is a true reflection of the uterine immune micro-environment. By conducting the immune profiling using monoclonal antibodies defining the T cells and the uNKs, it is very easy to predict the outcome of a planned pregnancy, especially in hosts who have previously shown recurrent losses of early pregnancies or failed implantation during assisted reproductive cycles.

The microbiology:
Many women who battle the emotional rollercoasters of fetal losses or implantation failures seem to present with these aggressive endometrium immune profiles (low uNKs and/or Trges relative to raised T cells and NKTs). It is tempting to simply state that genetics (family history of infertility) or poor egg quality are at fault here but new research is now emerging to show that the uterine microbiome is probably the culprit at play!

The evidence comes from studies into the interplay between the gut microbiome and tolerance to ingested foods: this is well established not only from animal models but from clinical studies in humans. We know that the bacterial species composing our microbiome are directly responsible for keeping the Tregs active and these, in turn, suppress the reactive T cells of our lymphoid tissue making up our enteric immunity, thereby preventing autoimmune reactions and chronic inflammation. When humans lose these important bacterial species other inflammatory species (capable of triggering inflammatory responses via TLRs) predominate and this is often referred to as a dysbiosis with the patient presenting with severe IBS and even early signs of IDB.

In their study, Moreno et al (2016) reported that the endometrial microbiome was stable during the acquisition of endometrial receptivity and that pathological modifications in this profile were associated with poor reproductive outcomes in in vitro fertilization patients. This uterine dysbiosis has also been shown in women with chronic endometritis, endometriosis and other gynaecological conditions such as vaginosis. Baker et al (2018) refer to these functional bacterial species as residents in healthy asymptomatic women versus the “tourists or invaders”: the physiologic and functional impact of these microbiotas on the local endometrial microenvironment and their immune mechanisms may influence poor reproductive, obstetric, and gynecologic health outcomes and sequelae in some women who remain childless. This is elegantly illustrated below in Figure 1 by Benner et al (2018). 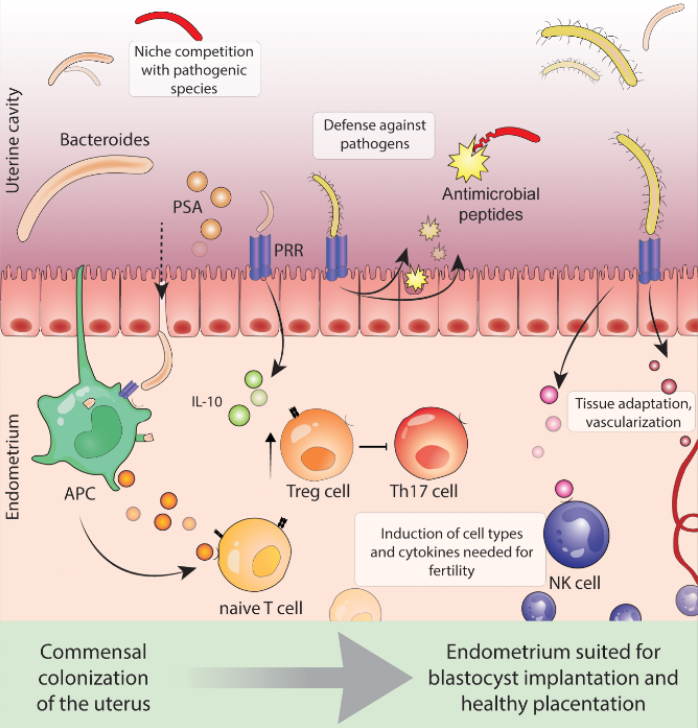 It is apparent that lessons learnt from gut microbiota and the induction of tolerance would apply here in cases of poor endometrial receptivity and failed implantation. It is not only about the immune cells creating an environment conducive to fetal implantation but these very cells need to be activated by Tregs which in turn are dependent on the presence of resident microbial species secreting the right nutrients and keeping pH at bay, etc.

Successful fetal implantation is not just about the right numbers of immune cells which create the tolerance to accept a half-foreign body implanting into an immune rich organ BUT having the right bacteria in the right numbers/profile is also a basic requirement to maintain that immune balance. In the end, it’s all about numbers.